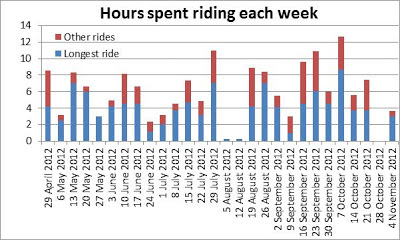 The graph shows the number of hours I’ve spent on the bike each week over the last months.

It’s been a highly variable performance, with weeks off due to knee injury, visiting family, other activities, and, at the moment, a rather lengthy cold.

What’s more, it’s well short of what I’d planned.  By September, I’d been hoping to have had the weekly total at around 15 hours, with a long ride of 10 hours plus at least every month.  Late October and early November were to be shorter hours but with harder hill work and lots of efforts.

The irony is that, despite the low mileage, a lot of it has been accompanied by symptoms of over-training – e.g. poor sleep, sweating, higher temperatures, cramping, and feeling quite exhausted.  Probably the result of ramping up the effort to make up for lost time.

So, basically, my training has a lot to be desired.  Next year, it might be worthwhile getting into a proper training programme to make sure I’m doing things correctly.

However, what about the here and now?  This time in three weeks, I will be 11 hours into what will probably be (for me) a 32-34 hour race, the longest race I would ever have done.  There’s no way that I feel any way ready for the Taupo Maxi Enduro.  The training is nowhere near what is required for a hilly 640 km race.  It’s probably sufficient for the 320 km race, but only just.  Should I be doing it?

There’s only one answer that I have for that question.  It’s “Hell yes!”

Most people would think I’m mad.  But they would also think that anyone doing endurance racing was mad.  I’ve always been interested in this type of racing, but the sudden revelation that let me take that first step into endurance cycling was a simple one.  The revelation was that … you are never ever ready for it!  There’s no way that you will ever have your body prepared for what such races will put it through.  There will be long periods where continuing riding will rely purely on your mind.  In the end, it’s mainly a matter of mental courage.  And that's the great test and the great appeal of endurance cycling.

So, should a lack of readiness stop me racing in three weeks time?   The answer – “Hell no!”
Posted by Andrew at 01:20