On every Saturday and Sunday, weekday workers hit the roads and do battle.  We battle against wind, weather, gravity, and the friction of rubber against tarmac.  But, most of all, we battle against each other … and against ourselves!

The weekend ride is the highlight of our week.  It's when we toss aside the stresses of work and concerns of family life and get in touch with what is our primeval selves.  It's when we feel real and truly alive!  When you're struggling up that hill, half-blind with sweat and gasping for breath, desperately afraid of being mown down by those behind but still in the hunt for the blurred figures just ahead, there is no room for any other thought.  The convoluted layers of social responsibilities and expectations laid down by millenia of civilization are stripped away, and all that matters is survival.  Most important though is pride.  We need to hold our heads high in that small band of brothers and sisters that we are part of, and it is this pride that keeps us pumping away on the pedals.

I started with the 60/40 group almost three years ago and have been riding with them off and on ever since.  What drew me to them was their friendliness, and this is something that keeps me returning.  Although my relationship with most remains on the level of cycling buddy, they are all important to me and I care a lot about them.  Indeed, I need them.  Whenever I'm feeling cut off from people through too many long training rides by myself or being particularly stressed at work, Helen would tell me to recharge myself with the 60/40s.  It always works!

As usual, we met at 8am just outside Paraparaumu's Bike Barn.  I think there were 14 of us there, with a 15th joining us as we rode past the Raumati turnoff.  The route was to be the 95 km around the Akatarawa block, consisting of Paekakariki hill, a  choice of the Moonshine or Haywards hill, and the Akatarawa hill, but with the extra challenge of Kaitoke Hill being thrown in today.

The ride begins along the flat No. 1 highway.  The pace is not usually intense, as we're still warming up and also getting re-acquainted with each other and catching up with the news.  The group has quite a spread of abilities, which tends to be fine on the flats, as the stronger and fitter members do most of the work at the front.  However, it becomes apparent when we hit the hills.  And what a scorcher of a hill Paekakariki Hill is!

You cannot ride Paekakariki Hill easily.  It's just too steep!  But we all give more than just the minimum required.  For some of us, it's a real struggle and we try desperately not to get too far behind.  For others of us, the race is on as we compete to be King or Queen of the Mountain.  I rarely come first, but like to be as close to the front as I can.  Today, however, I was struggling, still recovering from last weekend's ride.  I was thankful to take advantage of my decision to take photographs and stopped off just short of the top to take shots of each rider.

We tend to wait at the top for each rider to arrive, with some of the stronger riders often going down to accompany the slower ones up.  Then it's an all-out pace down the winding hill to the Battle Hill turnoff.  It's a struggle to shelter in the bunch, let alone lead it, as it twists and turns at speed down the road.  Finally we make it to Battle Hill, where it's time to re-group and have a few bites of food as we wait for the dropped riders.


From here it's on to Pauatahanui, usually riding together as a group and at pace.  When we really get it right, we even get a rotation going, but usually it's just several of the stronger riders in front swapping turns with each other.  If necessary, there's another regroup at Pautahanui, then it's on towards the Hutt Valley, crossing the range either on the Haywards or Moonshine hills.  I much prefer the Moonshine, as it's away from the traffic, is far more scenic, and is tougher, being longer, higher, and characterised by a “false flat” for much of the way.  Today, most of us turned left to go up Moonshine Road.

Today's ride was somewhat messier than usual, with people having different plans and using the ride for different purposes.  Some rode on while others re-grouped, and different people used different routes.  There's nothing wrong with this, but it did mean the ride was not the typical ride that I was hoping to describe in this blog.

I stuck with the main bunch, staying at the back to take photos.  I then rode up Moonshine Valley alongside Janice and Andrew, chatting with Janice about her plans for an all-night group ride later in the year.  They dropped me on the hill though, but I entertained myself using my camera to terrorise those I caught up with. 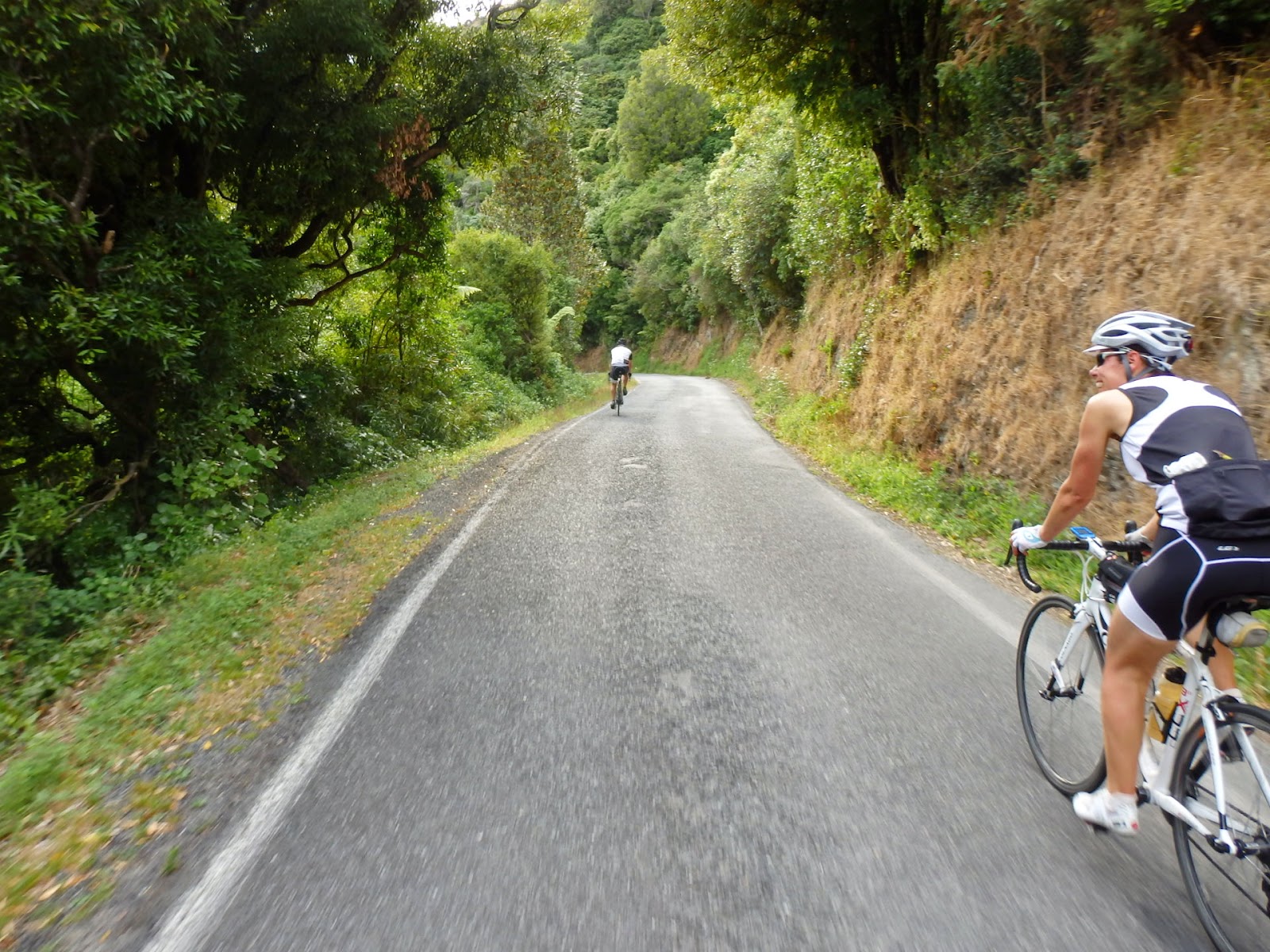 We were then down the very steep and windy other side and on to the Hutt Road, making our way along the valley towards the Kaitoke hill.  The bunch remained intact until Brown Owl, where some  hung a left and returned home over the Akatarawas.  Seven of us continued on to Kaitoke Hill.  No photos from me, as it was a bit of a struggle.  Adam was ahead, with Andrew trying to manage his gap with him.  I in turn was trying not to let Andrew's gap increase, only to be pipped just before the top of the hill with one of Janice's typical last minute surges.

The ride back down was fast and we were soon ourselves turning off onto the Akatarawa Road.  We broke into two groups, with Adam, Andrew, Janice, Gill, and me in front, and Simon and Viveca not far behind.  I could sense Andrew really biting at the bit, but Adam was having a great chat with Janice, generously sharing his huge bank of top experience with her.  As a result, the pace was a lot less intense than it might have been.  I still felt very much in recovery mode, so was thankful.  No photos from me again, despite the stunningly picturesque ride.


So the Akas were topped and the seven of us descended the other side.  Now, for me, this is the absolute highlight of the ride.  I don't know where my daughter, Raewyn, has got most of her riding talent and toughness from.  It's definitely not from me.  But when I remember my ecstacy charging down that long, steep hill, accelerating past other riders and taking corners at speed, I'm sure that there is at least the insiest bit that is genetic!

And the most important part of the ride, of course?  The coffee afterwards.  Shared effort and experiences makes for great camaraderie!  It's something we all enjoy and there is definitely no hurry to rush home!

So that was it, pretty much a typical 60/40 outing.  When not doing my Randonneur rides, I'm definitely going to be recharging myself with my good friends of the 60/40s, weekend warriors all!