This is my account of some rides I did last October at the top of the South Island.

How’s this for something to dream about?  You’re generally a bit stressed and things are getting you down, so your dearest says, “Why not take a week off work and do some cycling?”  After politely thanking her for the thought, you mull it over for a day or two and then, “Hey, why not?”  So out come the maps.  Your plan: to take the next Monday to Friday off work and fill it with as much cycling as you can.  You don’t want to go cycle touring, so you need to base yourself somewhere nice and central, so that you can cycle from and back to that place in various directions.  Your plan?  How about this?

The first step was realised and I got time off work – obviously I’m expendable!  All bookings have been made and suddenly it’s 5am Monday, the morning after the All Blacks win against the Wallabies, and the alarm’s going.  Quick last minute packing, a quiet kiss for the wife, and I’m off.

I found a place in Picton where I could park the car all day, and quickly got changed into cycling garb, hoping not to overly excite the locals in the process.  Then I was off!  Being nice and fresh and cycling at a pace to last the full 100 km, the 120m climb out of Picton was no problem.  The windy roads and uphill bits were fun and the views kept surprising with their loveliness.  Some care needed on the downhill bits, though, because of tight corners and rough road surfaces.  So things are going well, I’m 25 km out of Picton, almost ready for the next 120m climb before Havelock, and suddenly something’s jamming my rear wheel.  I quickly stop and investigate.  It’s not my water bottle or anything caught up where it shouldn’t be.  The brakes look alright.  Then I see it – broken spoke and wobbly wheel.  And guess who hasn’t got a spare spoke and wouldn’t even know how to straighten a wheel anyway!  Bugger!  Never mind, I did get a couple of waves as I cycled out of Picton and there were quite a few vans and utes that passed, so surely someone would stop to offer a lift.  Five kilometres and an hour and a half later and I was still walking, not at all impressed!  At last a good Samaritan stopped, dropped me off close to the car, and I was off to Blenheim for new spoke and wheel straightening.  I finally got to Murchison about 7pm.  It could have been a lot worse, but I was still very disappointed. 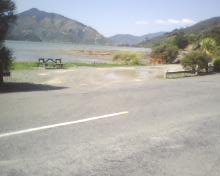 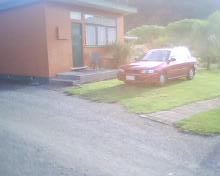 Next day (Tuesday), I woke up just before the 6.30 alarm and was off by 7.30.  No wind (despite predictions of strong Northerlies), but there was light rain and low cloud.  Murchison is beautiful, with several rivers intersecting in its vicinity, all lined by massive hills and mountains.  However, I was only slightly conscious of the scenery, as I whizzed along the 11 km to the turnoff to Reefton/Westport, trying to focus on the road through rain-splattered glasses, sticking as close to the side as possible to avoid logging trucks and other heavy armoury, and concentrating solely on the ride.  After the previous day’s problem, I was somewhat uneasy and worried about more spoke problems or having a puncture and having to rely on a hand pump for the duration, all without any support crew.  From the turnoff, it was another 40 km to Inangahua, with the road hugging the hills of the narrow Buller River valley.  Once again, astounding scenery, of which I was only partly aware.  The undulating hills were very manageable, with the highest being only around a 100-150m climb – perfect training for Taupo.  The road included several crossing of tributary streams and rivers involving one-way bridges, two of which were very long and one with traffic lights.  The village of Inangahua was a welcome sight, being a milestone (around the 50km mark), a change of scenery, and with the Westport road separating and taking with it most of the trucks.  Thirty five km to Reefton from here, with the road straightening out and going right down the middle of a wide mountain edged valley.  Just getting down on the bars and pumping along was a pleasant change, but as I got closer to Reefton, I found myself checking the odometer more and counting down the kilometres.  At last 85km and I was there. 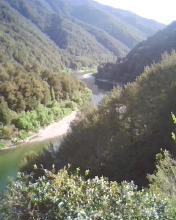 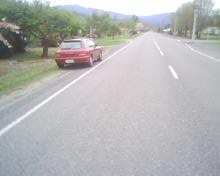 Then it was back, including cycling past the place where I had been hit by a magpie on the way in and counted my tenth hit before I got past the second time.  Three hits on the way to Reefton and seven on the way out.  One reason I can think for the imbalance was an emboldened magpie.  The more probable reason was a tired cyclist now fighting his way into what had become a strong northerly.  And it was tough – down on the drops, emptying the mind as I slowly ate up the 35 km of long, straight, never-ending road to Inangahua.  There was an unscheduled stop at Inangahua as I had a chat with a friendly Australian couple in their fifties, who were cycle touring and had stopped for a leisurely coffee.  Then it was back to the hills, which were actually a pleasant break from the painful monotony of the open plain.  The mind games were easier with the hills and there was a lot less wind.  Eventually I got “home” with enough energy (after a short lie down!) to clean the bike, have a shower, and get dinner done.  The ride was just short of 7.5 hours.  An early night to bed! 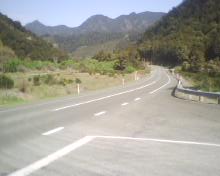 With only a 120 km to do, I could sleep in the next day, but once again woke up just before 6.30 am and found that, before I knew what had happened, I was ready to go.  However, energy levels were low and I felt that I really should just crawl back into that bed for another hour’s sleep.  Never mind, things should improve once I was on the road.  Such was not to be!  It was only 35 km to the junction where the Nelson road and St Arnaud road separated, then another 25 km to St Arnaud.  This involved an overall rise of about 250m to the junction and a further 350m to St Arnaud, with especially the first bit consisting of a continual series of undulating hills.  By the 20 km mark I just had to stop – just a wee one, but ridiculous so early into the ride.  After a bit more cranking up of that lagging mental fortitude, I was off again.  The problem, I think, is that my body had just run out of juice.  I had effectively hit the wall.  I’ve never done back-to-back riding over two or more days and I’m a skinny, under-muscled runt at the best of times, so there was little energy to call upon.  No problem with the hills, as I could still manage them with some strength and not too much puff, it was just those energy levels.  Eventually, 20 km out from St Arnauds, I had another stop, a sit down, and a mental battle.  Only 20 km to go!  I had to show some backbone!  After all, it was all about getting used to discomfort and exhaustion as preparation for the Taupo Enduro next month.  Finally, I hit upon a formula that worked – the promise of a flat white at St Arnaud.  And I got there, despite one more stop in the middle of the road, with a tirade of “F” words charging me up for the final push. 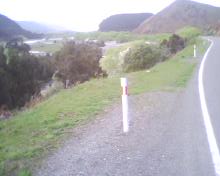 And guess what?  No café at St Arnaud!  Never mind, a loo stop and rest at the lee-side of the Information Centre, some sports drink and a muesli bar, then it was back to Murchison.  Now, of course, the wind was a strong southerly.  Wind socks that were previously limp were now at full throttle.  So, down on the drops, move those peddles, and … I was going 30km/hr plus, despite the head wind!  It was possibly the rest that helped, but the main contributing factor was that the road was actually very slightly down-hill, without appearing to be so.  Still, the mind games were required, with a promise of letting myself stand up on the peddles to stretch each leg, but only every 5km.  Twenty five kilometres later, I was at the Murchison turnoff.  The last 35 km was really hard and all a bit of a haze.  I had at least one stop where I lay down on a bench for about five minutes.  There might have been another, but I can’t remember.  Anyway, I eventually got back.  Another ride done, another day over, and another lesson learnt.  I genuinely can’t remember how long it took me, honest, but it was definitely nothing to be proud of! 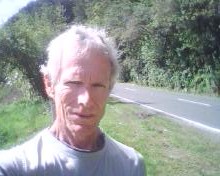 So the decision about the fourth day’s cycle … was … don’t be an ass!  Rest day!  Instead of cycling the route, I drove it … really slowly.  Now at last I could take time and enjoy the views and stop at every look-out point there was.  My energy levels were still really low and it wasn’t until after the flat white (at last!) after my dip in the Maruia Springs hot pools that I began to come to.  Have I said it before?  Stunning scenery!  The road up to Lewis Pass is amazing.  Everything was amazing!  And it was really good to drive back along the route I had ridden on Tuesday and see just how much I had missed by not looking around.  A chance at last to take some photos! 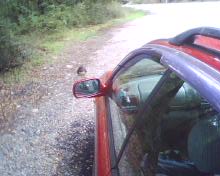 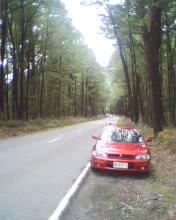 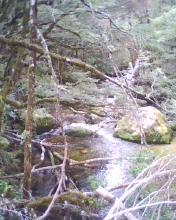 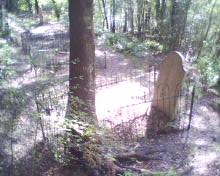 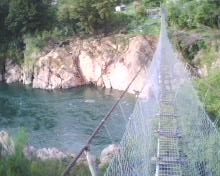 And, as expected/planned, no cycling on the Friday either.  Just a leisurely scenic drive up through Nelson, Havelock and the Charlotte Sounds drive, and home on the evening ferry.


So what lessons have I learnt from this sweat dream come true?
As a postscript, I would recommend the area for those inclined to such things.  There are stunning rides all over the place.  Probably best for a group of people, taking turns to drive a support vehicle, moving from point to point rather than staying at one place as I did.  Take your climbing legs though.  And if you have a spare place you need to fill, please ask me – although it all depends on how well I’ve learnt the lesson of point number five above, and the lessons that my one true love, the centre of my life, and she who I could never live without may have also learnt from my Murchison (mis)adventure. 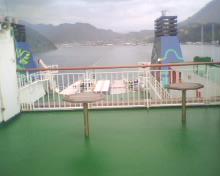