Making it twice around Taupo for a second time almost didn’t happen this year.

First, a couple of demoralising training rides led to a change of plans.  Rather than doing the race, I would instead cycle to Taupo from home (Paraparaumu).  This I thought, for some strange and inexplicable reason, would be less pressure despite being the same distance.  My plan was to ride up on the Thursday and have enough time to recover so as to support my daughter, who was racing in the 80 km Huka XL mountain bike challenge on the Saturday.

But then an old problem developed a few days before the planned excursion, with my knee swelling up and ruling out the ride.  I instead found myself driving up to Taupo on the Thursday morning and spending the rest of the day with leg up and ice packs on the knee.

With the rest and ice, my knee was much improved the next day, which meant that managing the race was becoming a real possibility.  But there was still one big problem – the weather!  A huge system of strong-to-gale force winds straddled the country and I just did not feel strong enough to compete with them.  By the end of the morning, I was 100% sure that I shouldn’t and wouldn’t ride, so was enjoying coffee and cake and looking forward to a few beers that evening.  But, just to put to rest that niggling doubt that perhaps I could do it, I hopped on the bike at 3pm and went to do battle with the wind.  After half an hour of riding, I came back having reached a decision – I’d be doing the Enduro!  So 4:30 pm had me entering a late registration for the 320 km race.  In nine hours time, I would be off!

The next few hours were fairly frantic with organising gear and logistics and stuffing myself with as much carbohydrate and water as I could fit in.  Then it was off to bed at 8:30 pm, where Helen and I managed to sleep fairly well until about 10:30 pm, when our dog woke us with his barking.  There was little sleep after that.  An hour later I got up and had a last feed of carbohydrates (creamed rice!), before going back to bed and relaxing until the 12.15 am alarm.  Helen didn’t go back to bed, but stayed up making drinks and organising the logistics.  More on her sterling support efforts later! 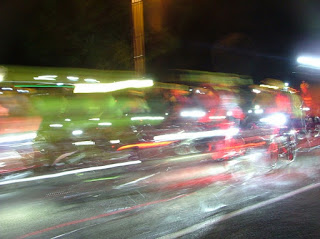 Strangely enough, having done the Enduro once before, I was not in the slightest bit nervous waiting at the start.  The die was cast and it was now out of my control.  I marched myself to the back of the bunch of riders and waited for the horn to blow to summon the long, lonely, painful hours to come.

At last, to my great surprise after the previous few days of doubt, we were off.  After crossing the bridge, it’s a long climb of about 20 km to the highest point of the ride.  I surprised myself by overtaking many of the riders at the back with ease, mainly because of my secret weapon – my new Specialized Roubaix bike!  I was then astounded to be in a bunch of what eventually became about eight riders and to be keeping up with them.  This had not happened in my previous Enduro, which turned out to be a long and lonely 14:45 hours by myself.

The group slowly whittled down over time, probably because we were not working as a group but dragging ourselves along on the coat-tails of at first one, then another, then another sole rider soldiering away at the front.  By now we were about four cyclists and my bladder was becoming uncomfortably full.  I had worked out that, with the help of my Roubaix, I was a stronger climber than my fellows.  So, one third of the way up the long Waihaha Hill, I stopped, did my business (it was dark!), then charged and caught the others up before the top of the hill.

Eventually we were down to two, with the rest of the riders having dropped off.  Then the rider I was behind dropped back and I – finally! – had to take the lead.  However, when I looked back, the other rider was no longer there.  I’m still puzzled by the fact that these riders were in the lead for such a long time without dropping back to let someone take over and that, when they did give up the lead, they fell right back and off the bunch.

Anyway, from there on to Taupo, I was by myself, except for a brief chat or two with people passing or being passed.  The wind was savage throughout the ride, often threatening to blow us over.  But I felt strong, in control, and very happy with my performance.

Perhaps the highlight of the ride, both this time and last time, was meeting up with Helen every 30-40 km.  Most times it was just a quick change of drink bottle, a thanks, and then off.  But what a joyful beam of light in the midst of an otherwise long night!

At last, dawn had broken and I was at the top of Waihi Hill, getting rid of my lights.  Then it was careening down that wonderfully steep hill towards what was now to be a mostly flat 60 km to Taupo.  Once on the flats, I was down on the aerobars and flying along at around 30 km/hr with a strong tail wind and little traffic.  However, the one hill to break that flat straight is a shocker.  I really cramped badly up on Hatepe Hill, once with cramps in both legs and me desperately looking around for a place I might have to fall.  But I made it to the top and, once again, to the cheery smile of my beautiful wife.  Another thing worth mentioning about Hatepe Hill is passing one of those absolute champs who were doing the 1280 km ride.  He still had two more rounds to go and looked pretty deflated.  “You’re a bloody legend, mate”, I said, meaning every word.

Dawn at the top of Waihi Hill 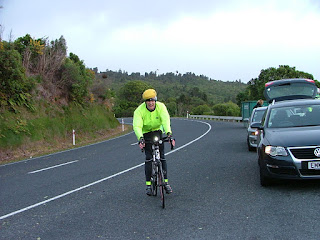 A restock in Taupo, a last goodbye to Helen (as no support is allowed on the last round), and then what should have been a quick stop at the BP station to get my electronic racing tab digitally zapped.  More than twenty minutes later, after having tried all I could with the computer, read all the written guff in the boards around the computer, talked with the attendant and made unsuccessful calls to two of the numbers he’d given me, and called and texted Helen to ask if she could at some stage follow the problem up, I walked out of the station with my time still not recorded.  I was disappointed, as it’s quite nice to show off, but in the end it’s really something I’m doing for myself and myself alone.

Restock in Taupo  - can you see the dog in the car? 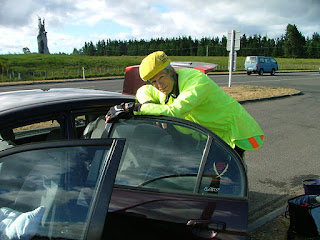 Then it was into the melee.  It’s fun joining the one-time-rounders at the round-about.  All the traffic is stopped, but I sail on through and get lots of acknowledgement and some cheers as I join the throng riding towards and over the bridge.  With the delay at the BP station, I was somewhat later than last year and was with slower riders than before – the group I joined expected to do it in 6:30 hours, whereas last year it was 5:40 hours.  Last year I was left in their dust, but this year managed to keep up and even overtake many as we all trailed up that 20 km of hill.

Besides Helen’s wonderful help, the other great thing about Taupo for an Enduro rider is the amazing support and adulation that comes from fellow riders and spectators.  It’s such a buzz!  It’s something that few would experience and, I must say, I lap it up.  My thanks to all those who so generously gave their encouragement!  Interestingly, something that was quite surprising this year was that, although there was still lots of encouragement, there was even more last year.  I’m not sure why, but have a few possible explanations: (1) the wind was distracting people; (2) the slower, less experienced riders may be more focussed on their own riding; and (3) I was not looking as shattered as last time.  I think that it’s probably the last reason.  People just did not feel as sorry for me as they did that ragged wreck they saw last year!

There’s not really much to report about the second round of Taupo.  Unlike last year, I felt strong and happy, managing to catch up with quite a few people and having chats and offering words of encouragement.  The only times I stopped, besides a water stop, was for stretches to stop the cramps coming back.  By contrast, last year I stopped every 30-40 km to just (metaphorically) crash and recover for about 5 minutes. 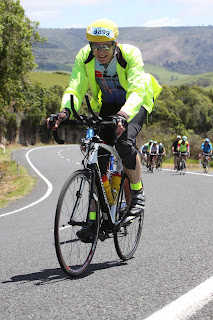 There seemed to be a lot fewer people this year round, with many probably having withdrawn due to the wind.  On ending the race, I heard the news that the Huka Challenge mountain bike race had been cancelled after almost 2 hours of racing, due to trees being blown over and one even hitting a rider.  A great disappointment for my daughter!

A lovely surprise met me just after the top of Hatepe Hill, with Helen waiting there with chair and refreshments.  It was only 15 km to go and I was still feeling (relatively) strong, but the temptation was just too great.  I took off some of my cold-weather gear (it was now really hot!), sat down in the chair, drank one of my daughter’s Go Fast energy drinks, and had a lovely chat with my wife.  Then it was, “Oh well, I’d better get this thing over with”, and away I went. 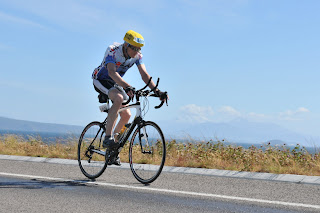 In contrast with the last time I went down the finishing chute, this year I was bright and chirpy and looking around.  There again was Raewyn waiting to cheer me in, along with Ash and Gavin.  At this stage last time, I was in a state of absolute exhaustion, just counting the metres to the finishing line.  Once over, all I could think of was finding some shade under a tree, where I collapsed and immediately fell asleep for about half an hour.  However, this time I didn’t even sit down, but stood talking with Raewyn and Ash, then walked with them to meet Helen where the car was parked.  Dare I say it, I could have cycled even more … !

So that’s my second Enduro and what a contrast from the first!  I can think of several reasons for the improved performance.
My final official time was 15 hours, which placed me well back (60th of 84 people recorded as starting the race).  The time compares with 14:43 hours last year.  However, the time does not give any indication of how strongly I rode compared with before.  It includes 20+ minutes delay at the half way point trying to get my electronic tag read.  Perhaps I could also include the leisurely rest I had with Helen 15 km from the end.  It also took place in really ferocious conditions.  So, all up, next year can only be a whole lot better!

And the winner is! 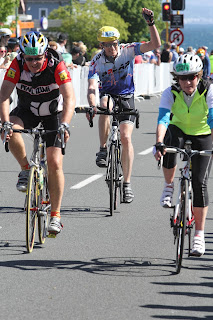